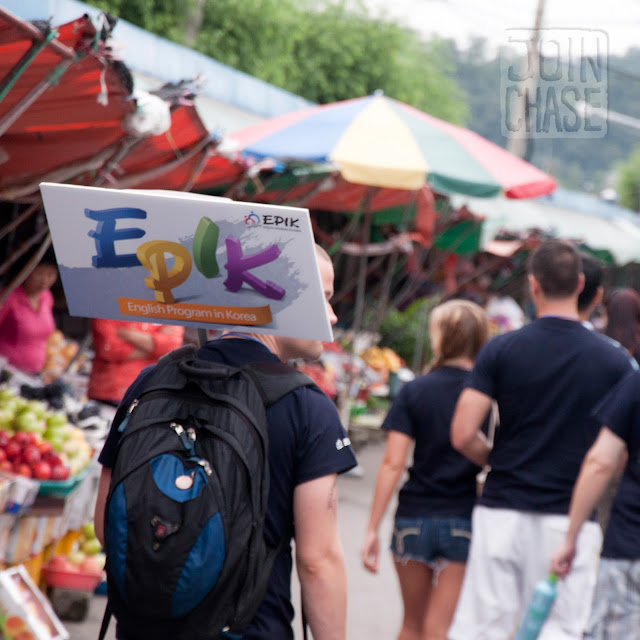 I’ve been very impressed with EPIK’s training program. We’ve had several nearly 12-hour days filled with sessions on topics such as: lesson planning, using multimedia in the classroom, how to make our English more comprehendible, proper public school etiquette, as well as an introduction to Korean culture and language.

Each of us got to make a hanji (rice paper) fan as part of a cultural field trip today. Aside from decorating fans on our trip, we got to see a Jeonju's Hanok (traditional) Village, visit Keumsan Temple, sample Jeonju bibimbap (Jeonju is famous for this favorite Korean dish), and participate in a traditional samulnori percussion performance outside Gyeonggijeon Shrine.

Quite a crowd had gathered to witness a group of mostly women bang gongs and beat drums. They wore colorful and extravagant garb, including large headpieces resembling pompoms. It didn’t take long for us to dominate the scene, as over 400 EPIK teachers (in matching blue shirts) invaded Jeonju this afternoon.

I went to grab my fan once the performance finished and the crowd dispersed. I set it down for a few minutes to take photos. But, it was gone. Perhaps someone in my group picked it up so I wouldn’t lose it. No one did.

A few onlookers remained. I scanned the ground in search of my fan.

Suddenly, something waving in the distance caught my attention. It was my fan. It was my fan in the hands of an elderly Korean man. He was fanning himself with satisfaction. How would I ever get it back?

Knowing annyeonghaseyo (hello), gamsahabnida (thank you), and seven vowel sounds in Korean wasn't going to work in this situation. So, I did the only adult-thing I could think of at the time. I told Lynn, one of my orientation leaders, to get it back for me.

Lynn and I laughed as we approached the man with my fan. I stood behind and watched as the two battled it out. He seemed a little upset, but thankfully I got my fan back.

Lesson learned: Watch out for those not-so-suspicious looking, elderly Korean men. One might be a fan snatcher.