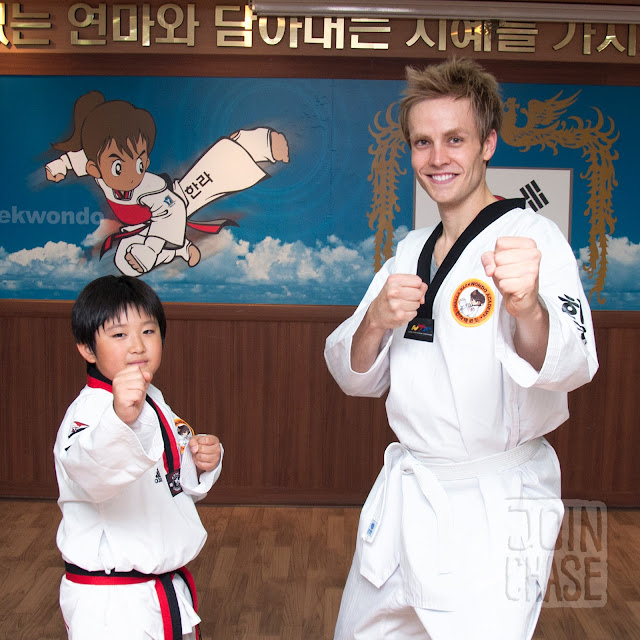 I met Joel on Tuesday. He approached me after lunch at school. Joel is in the second grade, so I do not get to teach him as yet. He was so excited to meet me, and spoke English very well (even used the correct tenses)! I am convinced Joel is one of the best English speakers at Bibong Elementary. He is confident and able to carry on a comfortable conversation. Most students are not and/or cannot at this point.

The timing of our meeting was perfect, fateful.

I ran into Joel on my way to Taekwondo the next day. We were getting on the same elevator. I was going to observe a class; he was in a Taekwondo uniform. Could it be we were going to the same place?

It turns out many of my students attend Taekwondo lessons at Halla Taekwondo. I did not think it was possible for them to get any cuter until I saw a bunch of my third graders kick and hop around in their little uniforms. They looked like dolls! Perfect, life-sized Korean dolls that kick.

I went to register for class alongside another Guest English Teacher in Ochang. Neither of us really knows how to speak Korean, although Linh is much better at it than me. Joel became our interpreter. Master would speak to us through him, and we would ask/answer questions via Joel.

It was as if our roles had reversed.

No longer were we the teachers. We were students for a moment, relying on an 8-year-old child to speak for us. It was a very humbling experience. Even more humbling is starting below most of my students' Taekwondo level. I think it will be good for them to see their teacher learning, or they will just laugh at how ridiculous I look.