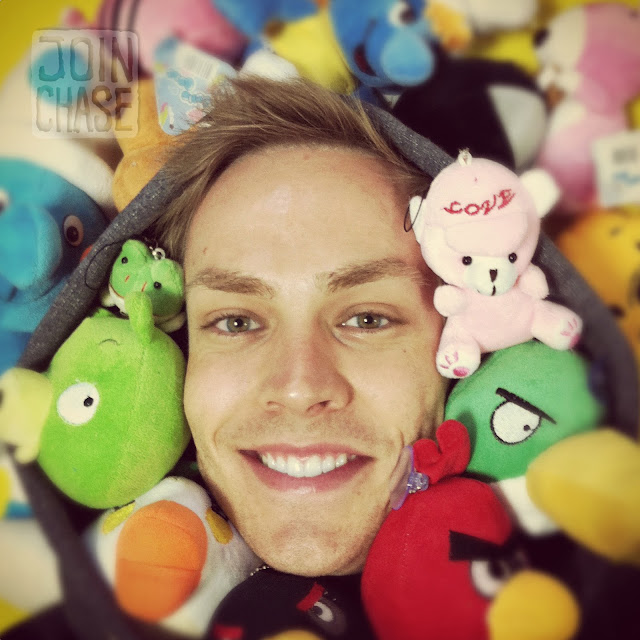 According to Wikipedia, A claw crane (also called a variety of other names) is a type of arcade game known as a merchandiser, commonly found in video arcades, supermarkets, restaurants, movie theaters, and bowling alleys. A claw crane may also be referred to as a teddy picker, candy crane, claw machine, crane vending machine, arcade claw, grab machine, crane game, skill tester, or simply the claw…

That’s the message I received from my friend, Dan, this afternoon. He didn’t need to pull my leg to throw on some pants and get out there. We met at the claw machines near the Greenmart supermarket. It was a successful day.

If you’ve been following my journey in Korea, you already know my path has taken a sharp turn for the better. My stock of nearly $60 USD in Korean coins is almost gone. I’ve spent it all on my addiction to winning stuffed animals out of grab machines.

I hate currency in coin form, and I had more change than I knew what to do with anyway.[#firstworldproblems] That’s why I don’t feel guilty wasting it all on crane games. It’s a win-win situation. I get to play, maybe win a toy, and rid my pockets of change at the same time. Makes sense (pun kind of intended).

I’m happy to report I’m not alone in my addiction. Half the other foreigners in my town seem obsessed as well, and let’s not forget to mention the tipsy, middle-aged Korean men I befriended last night. They’re always out there playing the crane vending machines at 4AM. Not that I would know…


I’m also proud of the fact that I’ve won almost the entire collection of Angry Birds—for my students, of course. I plan to use them, along with several Smurfs, numerous Pororos, and various other random stuffed gems in class. For games and prize purposes.

I’ve decided to never fully grow up. As I approach turning 28 years old, I still find joy and pleasure in the same things I did as a child. Besides, it helps me better understand and relate to my students. Now if you’ll excuse me, I need to go for my evening jog right past the teddy pickers. The yellow Angry Bird is chirping my name.

JOIN CHASE: Ryan and I