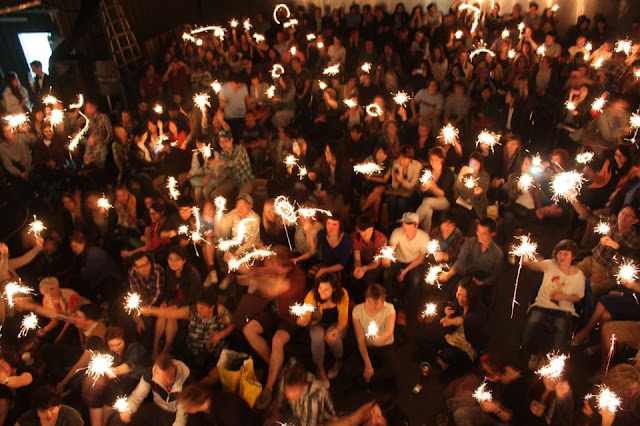 Perhaps it was the fact we lit sparklers inside the venue, or maybe it was the heavy pours of Chardonnay I received from the bartender. No matter the reason, I absolutely loved attending the Future Shorts Film Festival at Platoon Kunsthalle in Gangnam, Seoul.

Platoon Kunsthalle is part of “an international network of radical minds working together at the intersection of art, culture, and communication.” They create spaces for subculture to exist through exhibitions, workshops, and other various events.

Future Shorts is apparently the world’s largest pop-up film festival. I don’t know what that means exactly, but it was certainly worth popping in for the evening.

Ticket price was 10,000 (KRW) at the door. A bar with drink specials and snacks was available. Seven short films were screened before a full house. People from all over the world were present for Seoul’s showing.

Films for the Future Shorts’ Spring Collection 2012 included:
My favorites were Bear and Quadrangle.

The following are condensed versions of reviews posted to the festival’s website:

Nash Edgerton, who wrote, directed and starred in Bear, centers on the main character, Jack, as the film unfolds his tangled relationship, and tests whether he’s learned his lesson or not.

“Because I tend to play things fairly straight and never set things up like it's a drama or a comedy, the audience doesn't know what it's going to be, and something about that really works,” said Edgerton.

It definitely worked. I absolutely loved how the story developed.

Director Amy Grappel examines of a four-way affair in Quadrangle. Her short documentary explores the story of two “conventional” couples that swap partners, and live in a group marriage in the early 1970s. Set in Long Island, New York, this film challenges the boundaries of social convention, marriage, monogamy and desire.

“Inspired by the discovery of my father’s photographs, taken at the height of the poly-amorous affair, and in an effort to come to terms with my own past, I decided to interview my parents,” said Grappell, “The film does not propose answers and strives to remain objective….”

By the time the Spring Collection ends, it will have been screened a total of 260 times, in 144 cities, throughout 55 countries around the world. I thought the assortment was a fantastic mix of theme, type and cinematography. And the event paired perfectly with a couple glasses of wine, as well as friends to experience it with.

You don’t want to miss Future Shorts’ upcoming Summer Collection. Check out their website for more information. The main photo is from Future Shorts' Facebook Page. It was taken at Platoon Kunsthalle in Gangnam, Seoul, 2012.