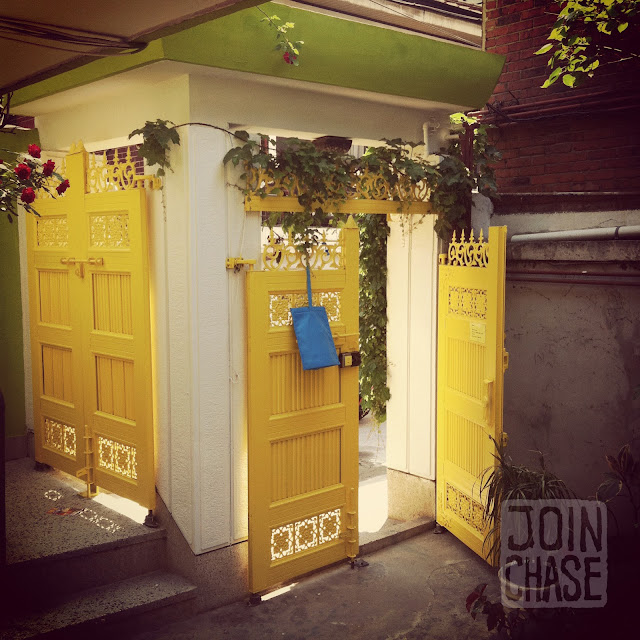 Who likes goodbyes? Raise your hand. That’s right. No one! Perhaps a few people do, but I’m willing to bet most people don’t. Goodbyes could be forever. And many people seemingly find it uncomfortable to acknowledge this fact in the present. So, we’ve adapted phrases to use in lieu of the more permanent ‘goodbye’.

I prefer to say, “Goodbye forever until I see you again.” It’s kind of a mouthful though.

What does ‘goodbye’ mean to you?

I met him at Lee and No Guesthouse near Hongdae, Seoul. We had a nice chat over a breakfast of watered down coffee and fried zucchini, sugary orange juice and toasted white bread.

He’s from France, but lives in Melbourne, Australia, and came to see Korea after finishing a freelance photography project in Japan. I want his life.

“See you next time,” he said as he walked out the door. How was he so sure?

God knows I’ve met a ton of people in my life; it’s not difficult for me to say “goodbye”. In fact, I’d rather say ‘goodbye’ instead of hanging onto a relationship that was possibly only intended to last for a specific amount of time and/or experience.

I thought a lot about goodbyes after he left. He seemed so sure we’d see each other again.

Sure enough I ran into him later, at one of Seoul Metro’s stations. He stood in a corner with his backpack, looking at a map. “Do you need some help?” I playfully said as I came up behind him. We laughed some, talked a bit more, and I suggested a few places to see around Seoul. That was it. "Goodbye."

Even though his presence in my life was short, I was able to deeply reflect upon what it means to say ‘goodbye’. I’ve also been inspired, again, to pursue photography as a job after teaching in South Korea (he’s living my dream). And as he suggested at breakfast, my next big trip should be backpacking across New Zealand. Sounds good to me!

Traveling is my school, and backpackers are my classmates, teachers and mentors.