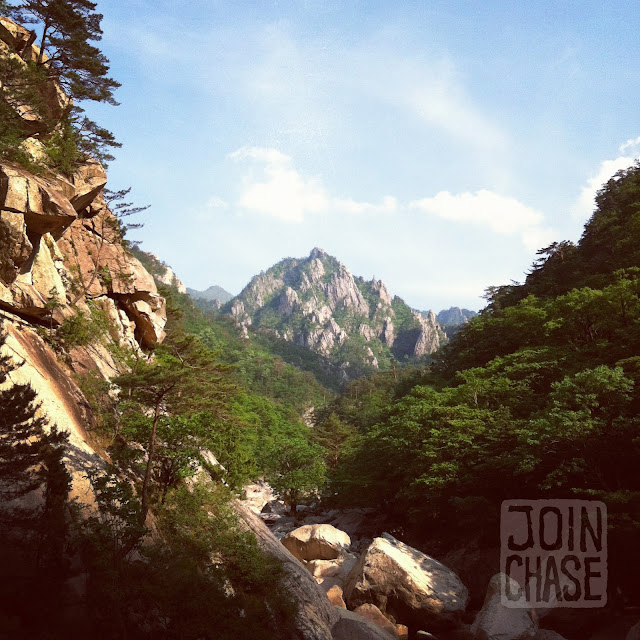 And then the bus dropped me off in the middle of practically nowhere, Suwon, and I didn’t know where I was, or how to get to my next destination. That was the beginning of my three-day weekend adventure. Seoraksan or bust!

Even when lost in Korea, there’s always a Family Mart (now CU) convenience store around the corner. The nice ladies working there let me hang out for a few hours as I waited to be found. They even charged my phone for me. In return I went on four shopping sprees. No joke. I bought about everything in the store.


It took my friends quite a while to figure out my location. After they finally did, we headed on our roundabout way to Seoraksan National Park, one of many beautiful natural reserves in South Korea. Seoraksan is the highest mountain in the Taebeak range, and is located near the city of Sokcho in eastern Gangwon province.

We didn’t anticipate it taking so long to get there. For most of the drive, we were stuck in terrible traffic on the expressway. Fortunately I had Julie, my new soul mate, to chat with. It was love at first sight. We didn’t shut up the entire time. Ask Trevor and Dave. Too bad she's married.

After we exited the expressway, the scenery surrounding us delighted our senses. Layers of old Korea dotted with paddies, mountains, and tiny towns filled with elderly people. Little shops, open markets, farmers out and about. Lanterns hung around countryside temples in honor of Buddha’s Birthday. It was all so beautiful. It was all so Korean.

Who knew driving through mountains could be hard on a vehicle? We were forced to pull over due to some minor car issues. The brakes were smoking, and needed to cool a bit. It allowed us time to explore the area, and it didn’t take long to stumble upon a group of Korean “baseball players” having a party.

They invited us to join, as Koreans often do. We accepted their generous offer. What else were we going to do in the middle of the mountains? Of course soju was busted out. We took a few shots together, ate samgyeopsal, ramen, and then sang our respective national anthems. The United States, Canada and Korea were represented well.

By the time we arrived at our hotel it was too dark, and too late to do anything but head to the local 711 and drink. Two of our new ‘baseball player’ friends joined us, as well as about eight other random foreigners. We had a great time. Julie may or may not have dropped her wallet in the toilet, and then possibly mistook it for a “floating sponge” that wouldn’t flush. Sometimes these things happen in life...

And sometimes you belt Disney songs in parking lots at one o’clock in the morning. That’s how Julie, Trevor and I ended the night. The hotel owner found it amusing, so we continued with our performance until our voices could sing no more.

The next day we explored Seoraksan National Park. Hopping along the river was more fun than staying on the path. We didn’t see the sign that said, “Do Not Enter.” It’ll be our little secret. After posing for photos, we grabbed lunch and made our way to the hiking trail.

None of us really planned or prepared to hike up a mountain. But, we began the ascent anyway, and soon found ourselves inside a tiny cave overlooking the Taebeak range. It was a spectacular, breathtaking view every direction we looked.

As we climbed higher, we got more judgmental glances. “Where are you staying?” Koreans would ask, “Where’s your gear?” We’d politely answer, “We’re just going to the top, and then hiking back down.” Apparently this isn’t normally how people hike in Korea.

At one point I posted on Facebook, “I might be at the top of a mountain with no water, and no gear. Whoops! At least I can still post a status!”

Not long after posting that status, a nice man by the name of Mike tossed us a bottle of water to share. I love how life works, how we’re often connected to total strangers in ways beyond our control.

That evening we wanted to check out Sokcho, but ended up stuffing our faces with McDonald’s (my meal was over 1,800 calories), before drinking makgeolli (Korean rice wine) at another 711. Not the most authentic experience, but we didn’t care. We were together, and having a good time. Karaoke at a noraebang near our hotel ended the night on a high note.

It didn’t take nearly as long to drive back. My friends live in Pyeongtaek, which is about an hour away from Ochang. After parting ways in Pyeongtaek, I caught a bus to Cheongju. The bus was so full I had to stand. And the woman next to me must have chomped on some raw garlic right before getting on. She reeked!

Seoraksan or bust! My first real road trip in Korea was quite the adventure. I’m so thankful Trevor invited me to join, and so glad I got to meet two other incredible people. Even though I just met Julie, I miss her like we’ve known each other our entire lives. I can’t wait to see her, Dave and Trevor again. I wonder what messes we’ll get ourselves into next time.

Lessons learned: Always bring a bottle of water in case you hike to the top of a mountain, and don’t mess up the lyrics to A Whole New World. Everyone gets upset.