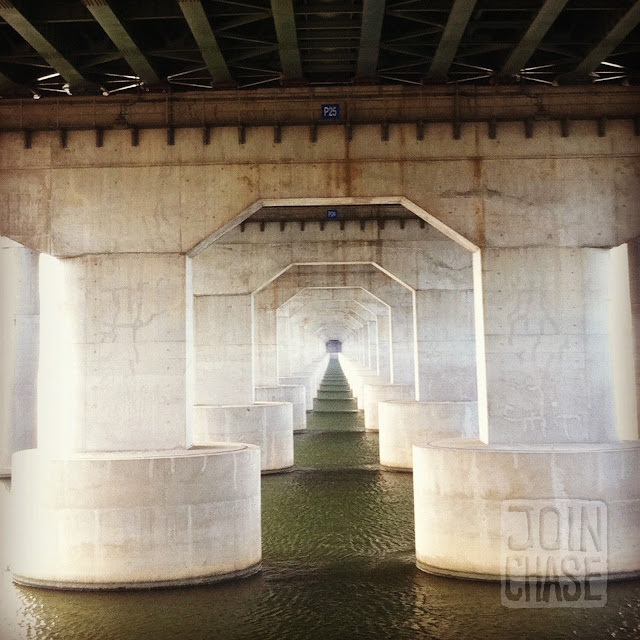 I’ve been spending a lot of time under bridges lately. The underside of life has a pretty good view too.


It all started when a friend and I thought it would be a good idea to drink makgeolli (Korean rice wine) under a bridge near downtown Cheongju. Turns out it was a really good idea! Don't worry. We didn’t harass the old men fishing next to us too much.

On our way back to Ochang, we made a quick stop for a second bottle of makgeolli. It fit perfectly in Gabby’s front basket. The distance between Cheongju and Ochang is about 15km. We needed nourishment for the ride.

Are you judging us?

It was dark. We were a bit tipsy, but no need to worry. We were quite careful, and took our time. Singing Disney songs (and maybe Spice Girls), attempting to do yoga poses while riding my bike, and an impromptu dance party below a different bridge helped us keep a slow pace. Good thing we had flashlights.

I found myself hanging out beneath more bridges along the Han River in Seoul on Saturday. It was a gorgeous afternoon to be out and under. A friend and I enjoyed relaxing, doing nothing but taking in the scene of everything happening around us. Tents, bikes, kites and people were strewn about.

We had a spur-of-the-moment photo shoot under one bridge, and then ended up skipping rocks, sipping soju with mango nectar, and talking about life as the metro passed loudly above another bridge. It was the perfect spot to gain a new perspective of Seoul.

This evening I was caught in a sudden monsoon. It literally came out of nowhere. Somehow I made it to a bridge before getting soaked. It served as my shelter from the rain, wind, thunder and lightening. I’ve never experienced what a storm looks or sounds like from under a bridge. It was pretty good view.

Take time to hang out under bridges and see for yourself. I’ve gained a new appreciation of what life looks like on the underside of things.