MOMENTS TO LIVE BY 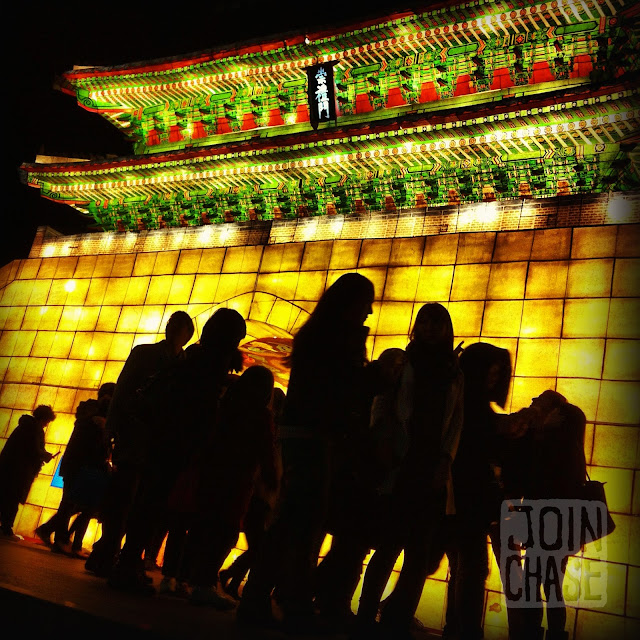 Sometimes in life you miss the bus, and you have to wait two hours for the next bus. And then sometimes you almost miss the next bus. This is why I'm so grateful for long legs. I made it (after sprinting/biking across town) with two minutes to spare! Destination Incheon—two or three hours late.


Erin and Suzette, friends that used to live in my area, were awaiting our arrival in Incheon, one of Korea’s largest cities about an hour west of Seoul. We planned to spend the day together, and have a little slumber party at their place that night. They prepared a delicious lunch, which paired well with a bottle of wine. It’s never too early for wine, especially after the morning my friend, Howl, and I had.

That evening we headed to Seoul for the lantern festival. Every year Seoul hosts a large display with a different theme. This year’s theme was “Roots of Seoul: A Day in the Life of Our Ancestors”.

On the way to the festival we bumped into one of Erin’s students and his mother. His English was quite impressive, and he spoke loudly for everyone to hear. His mother invited us to join a dinner fundraiser they were heading to upon observing our interaction. It happened to be near the lantern festival, and we’d be getting off at the same stop anyway. Why not?

Sometimes it’s awkward to be invited to things on the spot, especially when a group decision will need to be made. We avoided giving an answer thanks to every foreigner's friend in Korea, "The Excuse of Miscommunication", and just carried on like the invitation was never extended. It seemed easier and more polite to act like we didn’t know what she was saying, rather than reject the offer.

Just as we were about to get on the next train, Howl acted like he had to use the restroom. We told them to go ahead. At this point we were only a few stops way from Cheonggye Plaza where the lantern festival was being held. They must have been three or four trains ahead of us by the time we boarded again. Our mission to ditch them seemed successful. Until we got off.


Much to our surprise the little boy and his mother were waiting for us in front of where we exited the metro car. None of us could believe it! There was no getting out of the dinner invitation this time, so we decided go along for the ride. I'm so glad we did.

We followed them out of the station, down some stairs, through a door, and were immediately greeted by several cheery Koreans passing out free umbrellas. Free umbrellas! The room was all a buzz with guests raising money for children in North Korea. We were escorted to our table, and cordially welcomed with two plates of fried chicken and a few bottles of beer.

Of course we had to introduce ourselves to the crowd at one point, and no event in Korea would be complete without karaoke. Some drunken men were putting on quite the show, but sadly we had to leave just as it was getting good. We didn’t want to skip the lantern festival we came for in the first place.

Missing the bus. Being three hours late. Drinking a bottle of wine with lunch. Going to a random dinner. Getting a free umbrella. And crying at one point because everything was so beautiful. I live for such moments. There’s no denying they happen for a reason. The mother wanted to treat us. That’s it. Once a total stranger on Seoul Metro, she reminded me why I love traveling so much. Every day is full of adventure!