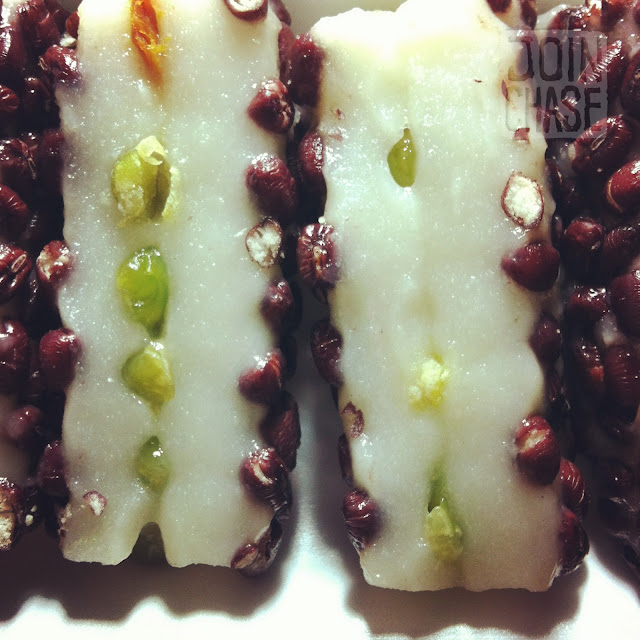 If you asked me to eat a giant block of rice a few years ago I would’ve been like hell no, except I wouldn’t have actually said hell because I don’t swear. And I didn't just swear because swearing in writing is like swearing in songs. It doesn’t count.


I couldn’t figure out why my Korean friends and colleagues loved rice cakes so much. I’ve been told it’s a texture thing. Some are big, condensed and spongy. Others are small, sweet and glutinous. Many are colorful and covered in a variety of nuts, dried fruits, and beans.

I've learned tteok is much more than just a rice cake. It’s a huge part of Korean history. Rice cakes in some way, shape, or form have been an important aspect of Korean culture for many years.

It’s customary to give tteok for a variety of reasons. Because of this, I’ve slowly taken a liking to the brighter, sweeter, and stickier ones covered in all kinds of goodness. I’ve even gotten into the habit of snatching a bunch from school functions to save as a snack for later.

The other day I caught myself gorging on a relatively tasteless brick of rice while waiting to board Seoul Metro. It was literally a heavy square of nothing but delicious rice. And that’s when it hit me. I’ve had a change in taste since arriving in Korea nearly two years ago.

Burnt rice is how I’d describe nurungji. It’s a popular Korean snack made from scorched rice. It can be served at the end of a more traditional meal, as there’s usually a layer of burnt rice in the pot. It can also be purchased and eaten as a crispy snack, which is what I prefer. Many Koreans enjoy adding it to hot water to make soup as well.

Much like my relationship with rice cakes, at first I wanted nothing to do with nurungji. Why would I eat something that’s burned? My Korean colleagues didn’t mind. It meant more for them.

Now I can’t get enough. Nurungji is completely addicting, delightfully crunchy, and just the right amount of burn to leave you all hot and bothered. There's something about the crunchiness of it. I keep eating until every crisp has been chomped. And I just discovered about three minutes ago that it tastes amazing with cheese.

Excuse me while I experiment with more ways to incorporate nurungji into every meal. I also need to make it to the store to buy more rice cakes for my evening snack. Hell yes!