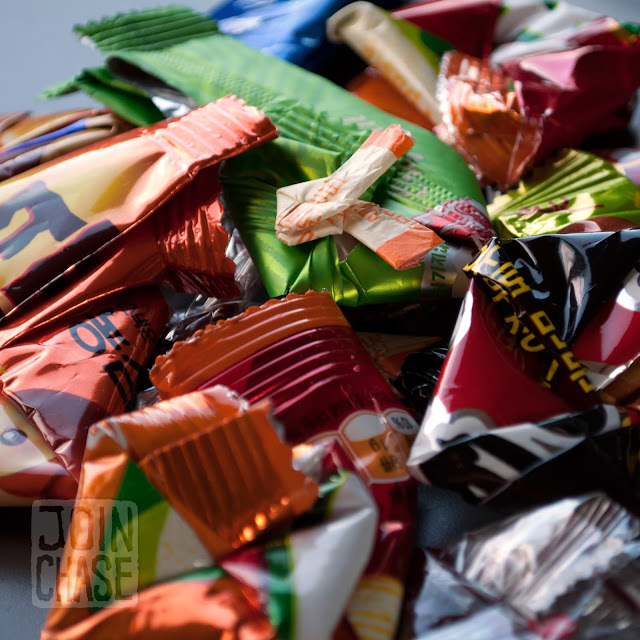 For those of you living in Korea, have you ever wondered why some Koreans tend to intricately fold plastic wrappers or scraps of paper before tossing them in the rubbish bin? Have you even noticed? Sometimes it takes digging through trash, literally, to see cultural details and differences.


I used to think the origami-like ritual was something out of habit. A way to stay busy during boring meetings, or when chatting with a friend. But, then I realized it’s actually something much more. It seems to be systemically ingrained.

I’d see my coworkers fold their wrappers, a few of my Korean friends, and even some of my students. It seemed like once I took note of it upon first observation, the more I’d find tiny folded pieces of garbage all over the place.

I finally asked one of my co-teachers why some Koreans do this. To which she explained it’s a way to condense trash and save space. Why hadn’t I thought of this before? Made perfect sense to me.

As South Korea continues to rapidly develop, it’s fascinating to see how certain details have seemingly remained the same from a different era. I imagine the folding of things to be discarded was more of a necessity when Korea didn’t have proper waste management systems in place. And now that they do (in most places), is making art out of every scrap necessary anymore?

I began collecting a few samples of folded items to see if there were any creative variations. Most appeared similarly fashioned, but a few stood out from the rest. I found rubbish in the form of squares, bows, ribbons, and knots. I even tried learning how to fold wrappers myself, but still prefer throwing the chip bag away without giving it much thought.

Do you know of any other reasons why some Koreans fold wrappers? Maybe it's for no other purpose but to play ddakji, a traditional Korean game. Is there an interesting way in which you get rid of trash where you live? Whether it’s for saving space or just for fun, I appreciate how conscious many Koreans seem to be in regards to energy conversation and environmental cleanliness.