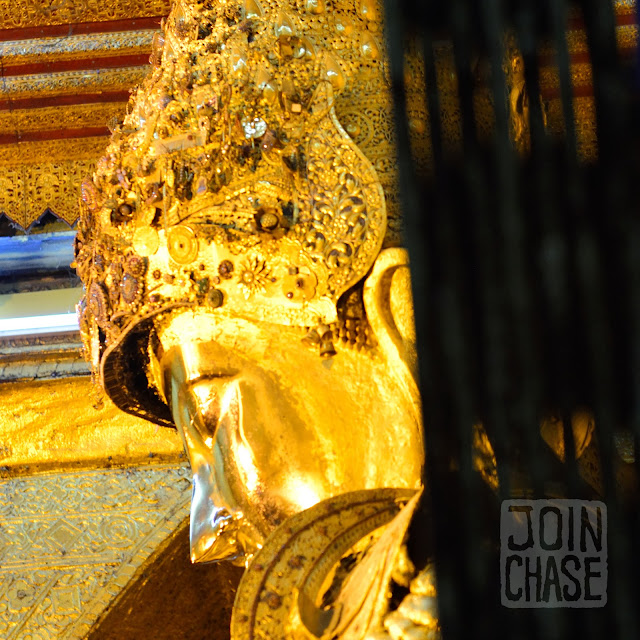 There I stood, with gold all over my fingers. Barely aware of what was happening. Fighting for space. A man kept saying well done, “Well done.” What had I done so well?

The escort I was with tried to show me how to do it, how to put the gold leaf on the statue of Buddha in front of us. It all happened so fast. I was doing it wrong. I got more on my fingers than the statue.

I was rushed to the entrance, and then handed thin sheets of gold from women I’d never met. Next thing I knew, I was behind the Mahamuni Image, one of the most popular Buddhist pilgrimage sites in Mandalay, Myanmar. I didn’t even know it existed just moments before.

Lights were everywhere. Gold covered everything. And peeling flecks blew in the breeze. That’s how close I got to be.

Men were praying, holding onto each other so they wouldn’t fall off the ledge.

Women sat around the base of the statue, unable to get close enough to touch it. But a foreigner who doesn’t even know what’s going on, let alone care, gets to stand there, with gold on his hands—gold from women who wanted to offer it to Buddha in exchange for goodwill and fortune—because he’s a man.

I’ll never forget the way it felt to rub the gold away. It was magical. As everyone frantically moved around the statue, I stood in the midst of it all, watching thin, shiny sheets turn to golden dust on my fingers before disappearing just as fast as it happened.