What I Learned from a Little Nun in Myanmar 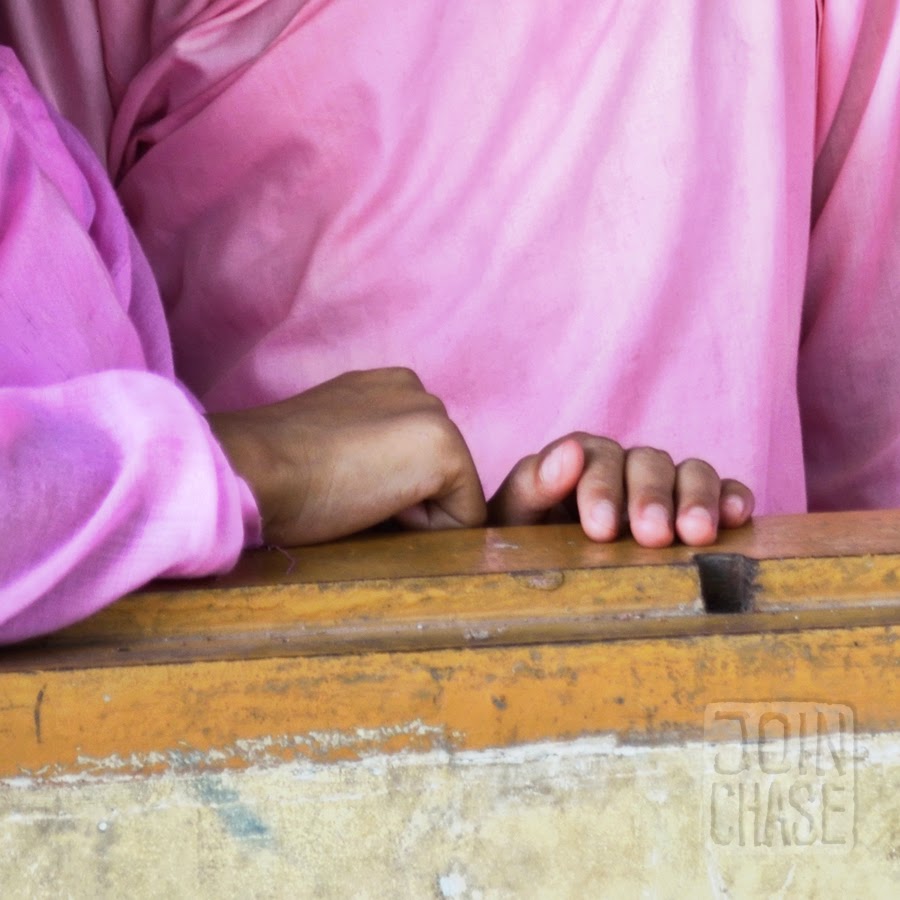 The car was left running, as the driver, my school’s principal, said she’d be back in five minutes. I sat in the passenger’s seat fidgeting with my phone—probably messaging a friend, checking what time it was—the usual distractions that cause too many moments to be missed in life. In fact, I was so immersed that I hardly heard her faint pattering on the window.

At first I only glanced long enough to notice a smattering of pink in my peripheral. Buddhist nuns in Myanmar wear bright-pink robes. I knew it was a nun peering in at me even without confirming it by checking for a shaved head.

I could feel the girl watching as I continued to intentionally disconnect from having to interact with her, from reality, from my reality, from the reality that is Myanmar on the other side of the window. However, she wouldn’t go away. Her tiny taps were incessant, and with every pitter-patter I felt more uncomfortable. I assumed the little nun wanted money.

She began saying something, something in the language Burmese—something I didn’t understand. The only thing familiar with her tune was the soft tone in which she spoke. It sounded like any child her age, a child no more than eight or nine years old.

By this time I had to look. Her curious, innocent, dark eyes were penetrating even without making contact with mine. I smiled an anxious smile. And she answered with a nervy grin as Doris, my principal, came back. Should you ever wonder, five minutes feels like forever when you’re being stared at by a nun. I was relived Doris had returned.

I asked Doris if she knew what the nun wanted. Doris also thought money, so we rolled down the window in an attempt to pass the girl some “pocket money”, a 100-kyat bill (about ten cents).

With no barrier between us anymore, the young nun shyly hid her face—all but her eyes—behind what she held. Monks and nuns in Myanmar often carry containers to collect food and other offerings as they walk about neighborhoods. Hers was filled with rice, and in one hand she already clutched tattered kyat notes.

Much to our surprise, the girl wouldn’t take the cash. She just kept observing me, and was now beaming from ear to ear. Her smile stood out to me, as she had the most perfect teeth for a child under similar circumstances in Myanmar.

Doris and the girl talked for a bit before we took off. I wanted to know what was communicated, so I asked a few minutes after we had left. Doris told me the nun wanted a book, the child was simply asking me for a book. My heart sank into my seat as I reflected upon the wasted opportunity.

The memory of the girl doesn’t haunt me; though, it’ll likely stay with me forever. What haunts me are my actions, or inactions, and how unresponsive and naturally judgmental I can still be after living here for a year. I’ve experienced countless encounters just like this one, all over the world, time and time again. How could I just sit there and pretend like she wasn’t even there? All she wanted was a book!