Photo Essay: More than a Postmaster in the Heart of America 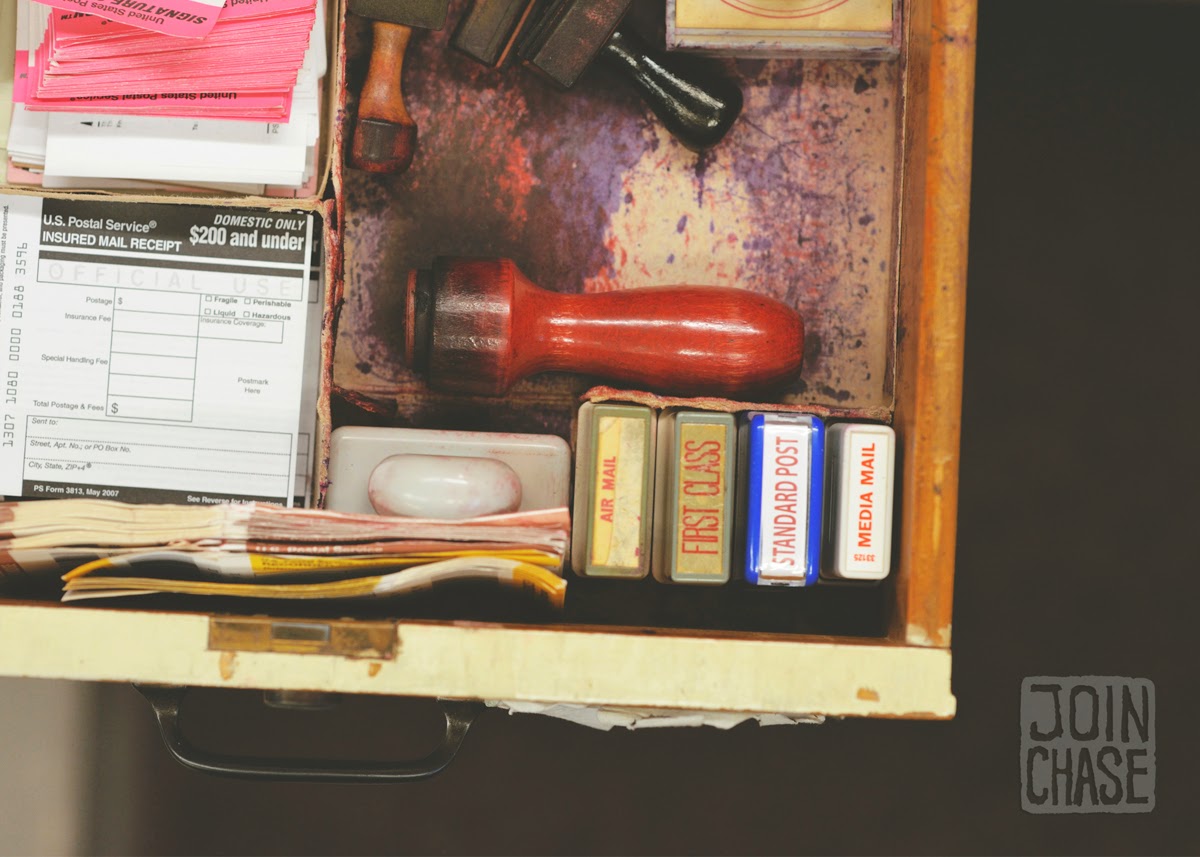 The forecast plays on the radio about every 15 minutes or so. The same old jingles from years ago can be still heard. Not much changes in these parts. At least not much has changed since I left almost a decade ago.


Dust settles on framed puzzles of postage stamps clinging to the walls. About everything seems to be the same inside Crystal Lake’s Post Office, too—except the price of a stamps pictured on those puzzles I helped put together as a child. Stamp prices have gone up a lot since then.

A woman leans on the counter. She chats with my mother about the weather and sewing. A man speaks of serving in a war, and reminisces about a long-lost girlfriend from his days spent living in Guam.

My mother listens to stories day after day. She's more than a Postmaster. She’s a story keeper. She's like a family member to most of her customers, a beat that helps keep this tiny town alive.  And my mother’s story is like the story of many other United States Postal Service (USPS) employees who’ve gone far beyond their assigned duties.

I can recall times my mother would have to stay overnight at her post office due to terrible snowstorms which are common during the notoriously long winters in Iowa. To venture home some 20 miles would mean risk not being able to make back to put out the mail the next day. That’s dedication to a job she’s loved for more than 25 years.

I was awake the morning my mother was getting ready for work on what we thought would be her last day as the Postmaster of Crystal Lake, Iowa.

“People come to me,” she began to tearfully say, “I listen and know their stuff… [USPS] doesn’t seem to understand. It’s not just a job. I look out for those people. If someone doesn’t show up, I check on him or her. I might be the only person some of them talk to in a day…”

It comes as no surprise that USPS has lost revenue in recent years due to fiercer competition within the parcel-handling field, in addition to a lack of mail being sent. This has forced the postal service to find ways to significantly cut back on costs—resulting in nationwide closures, consolidations, and a reduction of staff and services.

The demographic that’s been hit the hardest is people who rely on USPS, people like the ones my mother serves—people in the heart of America. Although many rural communities across the nation fought to save their post offices, numerous have been closed since 2011.

In order to keep some remaining post offices open, but still cut back on costs, USPS came up with a plan in 2012 to implement two or four-hour workdays at smaller offices as opposed to eight, and do away with full-time Postmaster positions and replace them with part-time, and/or non-career workers.

Postmasters nearing retirement were offered incentives to retire early, and others were able to continue working for two more years until an official reduction in force would take place in late 2014.

Since the news of my mother’s position being eliminated, she tried about everything imaginable to save her job, and to keep the Crystal Lake Post Office open. She attended meetings. She rallied fellow Postmasters. She wrote letters to legislators. She sought options, explanations and justice.

My mother could’ve taken the option to retire early, but she held onto the hope that somehow she’d be allowed to continue working at her office, even as a part-time employee. However, for some reason, Postmasters weren’t being given the chance to stay at their posts. They’d have to apply to work in various capacities at other, larger locations.

My mother felt the situation never looked right. Steps have to be taken to keep USPS alive; however, closing post offices and uprooting hundreds of devoted, knowledgeable employees would only hinder sustainability. All towns deserve to have someone such as my mother as their story keeper. Customers deserve service with a smile alongside dependable delivery.

A man now stands at my mother’s counter, asking her to mail a check for nearly $300. He believes he’s won a car. At least that’s what he’s been told by someone who keeps calling him. My mother realizes it’s a scam, and patiently tries to talk him out of sending the money. She offers to phone his family. She researches the address for any suspicious activity. She tries to get ahold of a department within USPS specializing in such cases. Even I attempt to convince him. Nothing helps change his mind.

“Since 1969 nothing has really changed in this place,” jokes one of my mother’s regulars who moved to Crystal Lake around that time.

More and more townspeople pour in. It’s the holiday season. A few talk a bit. Some stay awhile. Others sort through their mail right in front of us—pausing to look and smirk at bills. One proudly shows off a wall decoration she crafted out of vintage jewelry.

In a place like this it’s an event to go to the post office. In a place where the only plans someone has for the day might be to write letters, play cards, or fix a garage door.

A very white-haired woman smiles at me as my mother introduces us, “I see you’ve come out to the big city.”

My mother is more than a Postmaster. She’s a family member to this community. She’s their story keeper. I travel the world to find stories, but she’s reminded me that stories are right in front of me, right here—right in Northern Iowa. I was fortunate to get to spend a day with her at work. I wanted to see my mother in her element, and experience her story before she was nearly forced to end it several pages too soon.

I’m proud of my mother for trying so hard to save her job, and her post office, for more than three physically, mentally, and emotionally exhausting years. She’s demonstrated the importance of never giving up, and Crystal Lake, Iowa, has its story keeper back as a result.

Shortly after my mother’s last day at Postmaster, she was suddenly reinstated and offered the option of converting to Part-time Flexible Clerk at the Crystal Lake Post Office.

“I’m overwhelming thankful for this opportunity,” my mother recently shared, “I’m thankful to a VP of Labor Relations who cared and negotiated to make a difference for impacted Postmasters across the country...”

To the United States Postal Service: Thank you for listening to my mother’s pleas. I applaud you for your efforts in finding ways to stay relevant in our technologically advanced society. But, attempting to get rid of or displace employees like my mother isn’t the answer—in my opinion—and small-town America appears to depend much more on your services than elsewhere. Surely the cost to keep rural offices open and staffed with reliable employees is trivial when compared to the big picture. Please take this story, and the stories of the people my mother listens to and serves, into account when deciding what the next chapter will be. Thank you.