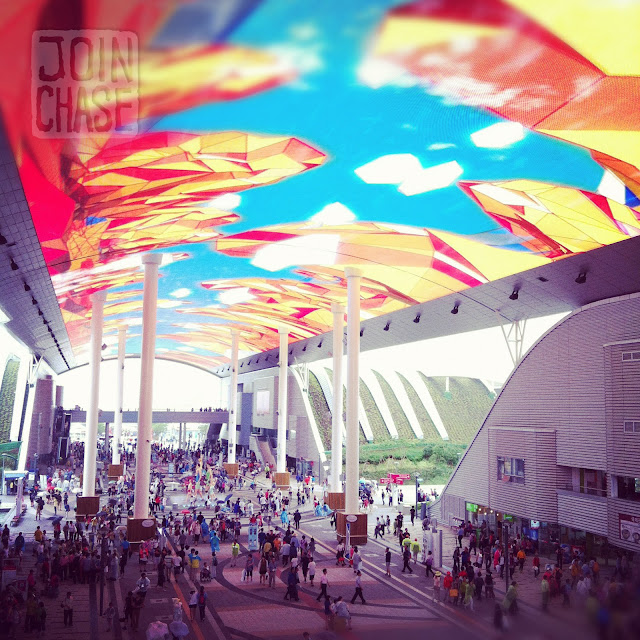 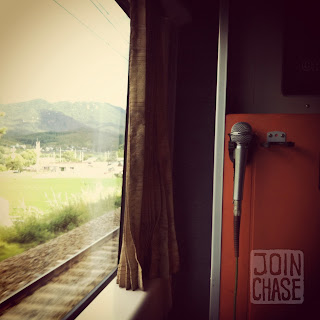 To sleep or to fill every moment with beautiful people, amazing places, lots of love, and tons of random fun? That is the question. I’m averaging about five hours of sleep per night. Only because every day is so full of moments I can’t let pass by.

I try to get some rest on weekends; however, weekends fill up quickly, in advance, and usually plans overlap with one another. It’s a good problem to have. I think.

This weekend I said “yes” to Yeosu, and boarded a 6:53AM train from Jeungpyeong with Ryan. World Expo bound. Transit time to Yeosu would be nearly five hours, with a stop in Daejeon, quick taxi ride, and one train transfer.

In Daejeon we met up with Tom, one of Ryan’s friends. While munching on stale potato chips, the three of us waited for our train to arrive. The train would be full, as our tickets were “standing”. But, ‘standing’ on KORAIL means sit wherever you can. Floor. Table. Toilet. Take your pick!

Once on the train we headed for the concession stand. Fortunately, the snack car also had karaoke rooms, as well as arcade games from circa 1988. We decided to pay for at least an hour of noraebang (Korean karaoke). We managed to squeeze three guys in a two-person room, and it ended up being the best time of my life (that day).

Belting out Celine Dion, Britney Spears, Madonna, and other classics on a train cutting through Korean countryside at 9AM was definitely the highlight of the weekend. It was even better than the World Expo. I could've just stayed on that train all day, and would've been perfectly content.

We arrived with about six hours to take in everything the 2012 World’s Fair in Yeosu, Korea, had to offer. “Dreams for the Ocean, of the Future, and Harmony among Humanity” was this year’s theme. Six hours was long enough.

We stood in line a lot, walked around some, and ate too many chicken tenders. Seems to be what happens at about every Korean event I’ve attended.

What I enjoyed most about the expo was seeing cultural exhibits from places I’ve visited. Nearly 50 countries participated in the International Pavilion. Sipping on teh tarik after meandering through Malaysia’s display brought back wonderful memories of my time in Southeast Asia.

The absolute best was finding Guyana’s booth and meeting Katherine, a Guyanese woman who lives just two blocks from where I lived in Kitty, Georgetown. We gaffed about the beauty of Guyana. Hearing her accent brought tears to my eyes.

I left Yeosu with a heart full of nostalgia, and a belly filled with grease. It was neat to see so much diversity in homogenous Korea. Now I can’t stop dreaming about places I want to travel in the future.

For those still planning to attend, I thought the United States’ presentation was best (in an unbiased opinion). I cried during the video. Definitely check it out. And say "holla” to Hillary for me. She floats in a computerized bubble.