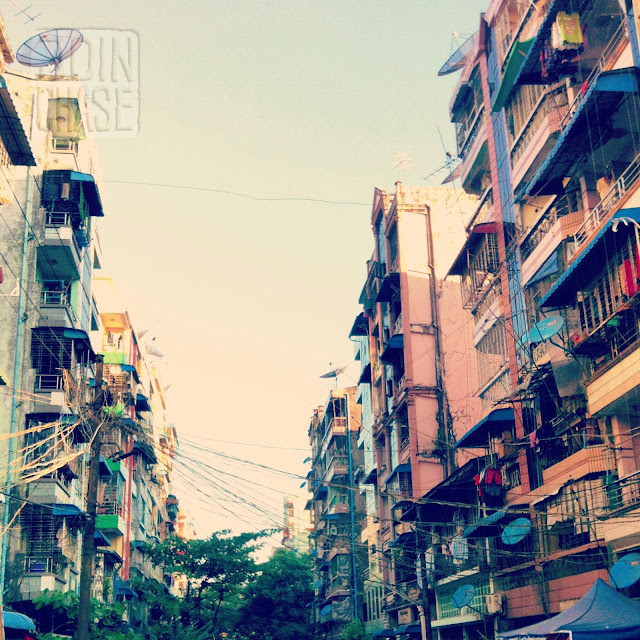 There’s a slight problem. I’m afraid to step out of my apartment. My neighborhood in Ahlone Township, Yangon, Myanmar, is terrifying in a totally nonthreatening, irrational way.

The amount of willpower it takes to simply walk to the convenience store at the corner of my street is astonishing. Some days are better than others, but days like today; the last thing I want to do is leave the safety of my place after getting home from work.

Things change when you transition from being a visitor in a foreign country to moving in. And having bars on your windows and doors isn’t the same as being in a somewhat protected, gated community.

At first people may shriek when they see you. After a few days the gasps will probably subside, but stares from every direction can still be felt with penetrating force. I never know what to focus on, there’s simply too much visual stimulation. One block here is like a bustling, crawling, little city.

I couldn’t possibly stand out more if I tried. Everything about me is different. Obvious things like my hair and skin color are just the beginning. How I dress, the shoes I wear, the way I walk, where I look, when I smile—every detail separates me from ever being able to “blend in”.

I try not to make eye contact with anyone as I quickly walk to and from the taxi stand or store. I’m afraid I may appear to be intimidating if I do. But, I also don’t want to be rude if I don’t.

Some people give off very curious vibes. Others appear to be quite welcoming. A few don’t seem to want me around. Most probably don’t actually care. But, the children, the children make me feel comfortable. It’s always the children I befriend first. In every country I’ve lived.

Children in my neighborhood follow me to the shop sometimes, giggling. Their stares are less probing. They stop whatever it is they’re playing to watch me pass, and occasionally walk right behind me, thinking I don’t know or feel their childish presence.

I’m thankful to have Don, a fellow Guest English Teacher, to live with. Our landlady has been very warm and hospitable. Her oldest son speaks a lot of English, and our neighbor is so kind as well. But, still, both Don and I have this ridiculous fear of leaving the apartment.

The taxi drivers have become our "friends", but basically only because they know they can probably get away with charging a little more than what a local would pay. I usually don’t put up a fight because by the time I get in the taxi, all I want is to be driven away, driven out of here, driven to familiarity and luxury.

We have a man who lives across the street from us. He caught my attention from day one. He’s the only person who doesn’t seem to have an internal sensor telling him to watch out for the foreigners. He never says anything, he just sort of looks, and gets really close. He’s opened the door of whatever vehicle I’m getting out of several times, and he’s even tried to help me carry things. I think.

I’ve watched him from our first-floor balcony, and have concluded he’s got some mental issues. He carries a mirror with him, and often admires his reflection, as someone might do in the privacy of his or her home, fixes his hair, smiles with acceptance, and then goes about sitting and observing the world go by for hours. I'm sure I'll have many more stories to share about him.

At least the cashiers in the convenience store have gotten used to me. They know my routine. I come in around the same time every night, I usually buy the same thing(s), and I always use my black backpack instead of getting a plastic bag. They even help me put my things in the backpack now, and zip it up for me before I leave.

My neighborhood isn’t actually scary, and people aren’t mean. It’s just going to take a lot of time and effort to integrate, to feel at home, to get to know how everything works. And this is why I put myself in these situations. It’s good to shake things up a bit, step out of your comfort zone every now and then.

It’s similar to what it was like in South Korea when I arrived, and it’s almost exactly the same as what I experienced in Guyana, South America, during the first few months. It just takes time to warm up, no matter how used to living abroad you may be.

It helps to have daily missions. Don and I have a big list of quests to accomplish including figuring out how to buy drinking water, finding out where to put our trash, obtaining an extra key to the outside door, and perhaps most importantly, making our presence known at the street market a few blocks away.

It’s amazing how seemingly simple tasks become such a huge process when you move to a foreign country. Reminds me of when I figured out how to use the washing machine for the first time in Korea.