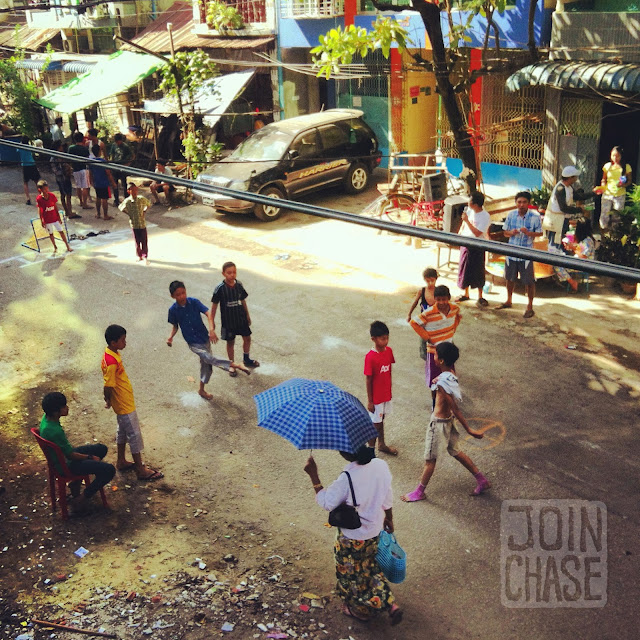 My neighborhood was particularly loud yesterday morning, more so than most (which is saying a lot). It doesn’t matter what day of the week it is, I’ve quickly learned it’s basically impossible to get a full night of sleep in Yangon. From as early as six in the morning, people shout what they’re selling, dogs howl in the distance, and footsteps of children can be heard galloping down the stairs above my bed.

People took to the streets to celebrate Independence Day in an interesting way. There were no fireworks or parades to commemorate when Myanmar gained freedom from the British. In fact, no one even seemed to pay much attention to the actual reason for the national day of recognition. They played games instead, all day, directly in front of my apartment.

I woke up to the sound of blaring music and a crowd of children gathering. It was beautiful, so beautiful to observe everything from my first-floor balcony. With a cup of coffee in hand, Don, my flat-mate, and I watched as kids raced back and forth. Someone had even painted a start and finish line on the road. The entire event was organized quite well.

Parents stood along the sidelines, cheering their children on as they ran. There was a prize table with small awards, and light snacks for the participants. Many of the adults seemed to have a role. A few were in charge of rounding up children, one had a megaphone, another had a whistle, and an older man used a stick to clear people out of the way.

Different age groups got involved throughout the day, and games changed from racing to soccer to hitting the bucket like a piñata. Little glances would look up at Don and me. We’d look back and smile. It was fun to see some of the people I’ve gotten familiar with over the past few weeks.

Some of the children who follow me to the store were there. So was the little boy who grins, runs away, comes back, beams, and runs away again. The woman who lives across the road was there as well; she helped me purchase water a few days ago. And the child who cried when I waved at her for the first time was also there.

Once the games had finished, people set up a big stage in the middle of our street. Children did some performances, and participated in what appeared to be a talent competition. It lasted all evening. I think the same song was sung over and over again, by at least 20 children. Don and I practically memorized it, and joked about being able to be contestants in the competition.

I was told this is what people from Myanmar do to celebrate Independence Day. Many neighborhoods throughout the city probably hosted their own community activities as well. What a wonderful holiday tradition to have.

Faint whistles and cheers could still be heard as I went to bed. They competed against sounds coming from a game still going on around midnight, just down the street from my building. And just as predicted, I was up early this morning. Thanks to the noise. It’s going to be another beautiful, loud, day in the neighborhood.