FUN, EASY WAYS TO SPICE UP YOUR ENGLISH LESSONS 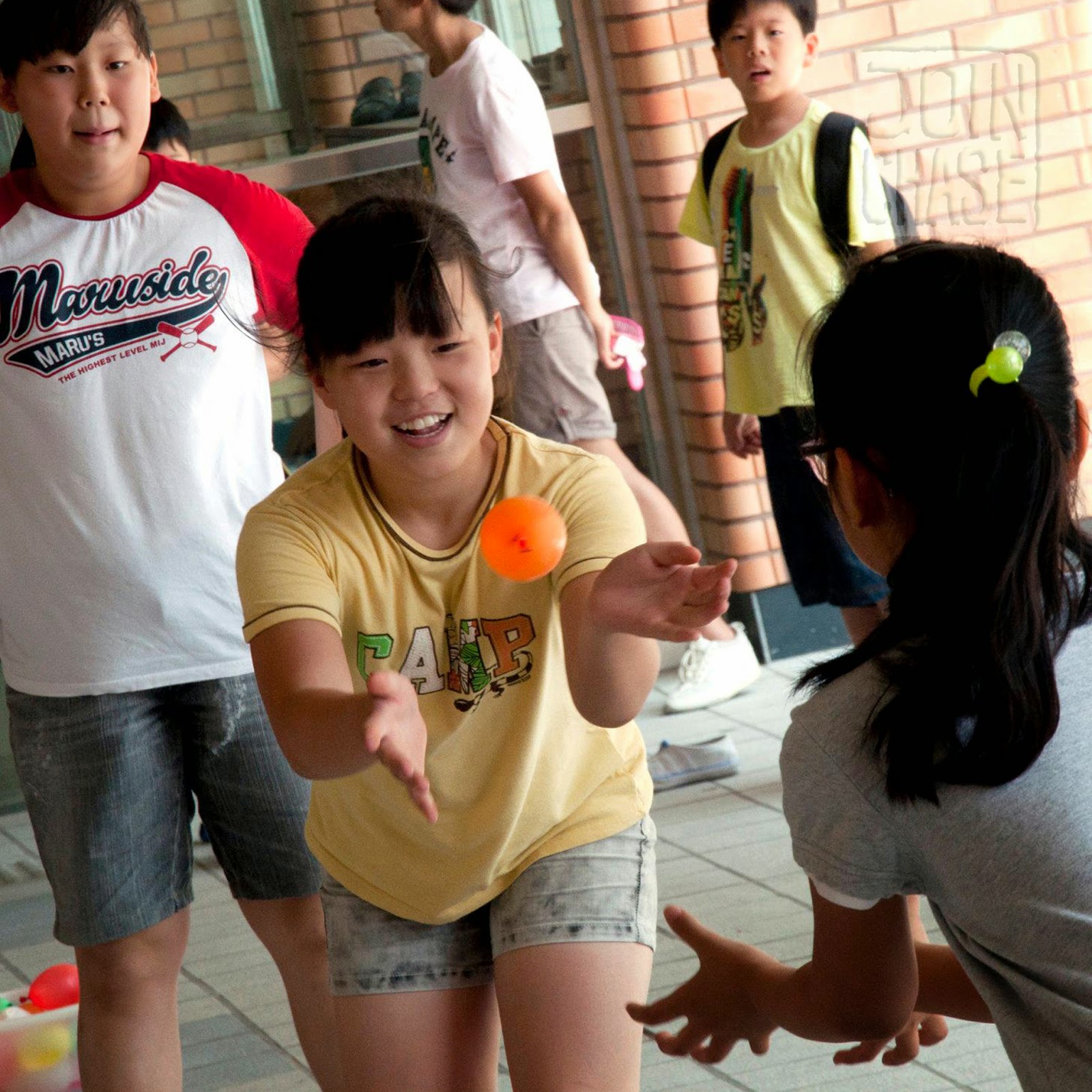 Sometimes putting students in difficult situations forces them to communicate. Using team activities in the classroom not only requires students to work together to accomplish a specific task or mission, but also helps them use English more naturally.

The goal is for all students in a group to stand on a sheet of paper without anyone touching the ground with their hands or feet. If someone steps off the paper at any point, the team needs to start over.

Teams can be as creative as they would like with how to get everyone on the same piece of paper. The only rule (apart from safety) is students must communicate with each other in English. You can decide to penalize a team if you hear the native language being spoken (in this or any of the following activities).

Start with a large piece of paper, and decrease its size depending on how well students are doing. Make it a class competition for added fun.

Divide your class into groups of five to eight students. Have groups stand in a circle. Each student should grab the right hand of someone across from them, and then do the same with their left (ensuring they aren’t holding both hands of the same student).

The aim is for teams to untie themselves without letting go of each other. Students should only speak English to communicate their way out of the knotty situation. If a player stops holding the hand of another member, have their team start over.

Activities like All Aboard and the Human Knot are great for practicing directions, prepositions of place, and commands. They also work well for all age groups, but divide older students in teams according to gender.

The challenge is for each group to create the tallest, most creative balloon tower out of selected materials, within a certain amount of time, and strictly through communicating in English. Make it a friendly contest.

Split your class into teams of three to five students. Give each team a set of supplies such as: balloons, a balloon inflator, tape, rubber bands, and straws. To make this initiative more difficult, require towers to be freestanding. After the allotted time is up, have each group present their design to the class, measure for the tallest tower, and vote on most creative.

Because this activity requires a higher level of English and skill, it’s best for high school, university, or even adult learners.

Changing the environment of a classroom adds new life to a lesson. Games usually played outside could also be done inside, or simply move your class outdoors for a lesson.

Water balloons are perfect for hot, summer days, and can help students review English while cooling off. Water balloon races may be played outside, or in a hallway or classroom with tile flooring.

Depending on the size of your class, form two or more even teams (five or six students per team works best). Have two buckets per team, and lots of water balloons filled up ahead of time.

As with any relay race, have a start and finish line. Place an equal amount of water balloons in each team’s bucket at the start line, and set the empty bucket for each team at the finish. The start and finish should be about 20 feet apart.

Place members of a team three to four feet away from each other in a straight line. The player closest to the start line picks up one water balloon from the bucket to begin, and then tosses it to the next student. After catching the water balloon, each member has to toss it to the next player in line. The object of the game is for a team to get the most water balloons into their bucket at the finish line within a limited amount of time. If a water balloon breaks or falls, the team has to start over from the beginning.

When the last student in a line places the water balloon into his or her team’s bucket, they must say an English expression, or answer a question from the teacher, before running to the beginning of the line to pick up the next water balloon to throw. All players move up one place, so every student gets a chance to practice English during the game. Water balloon races work especially well for younger students.

If you don’t have a large space in your classroom, take students outside to do this activity. Draw one large square and divide it into four equal parts (with tape or sidewalk chalk). In each smaller square, place an English word, expression, or question depending on age, level and lesson topic.

Have each student stand in one of the four squares. The highest-ranking square is the fourth. The player in this square serves. The ball is served by bouncing it once before hitting it to another player.

Receivers must hit the ball back to any other player after it bounces once in his or her square. Play continues until a player hits the ball out of bounds, or it bounces twice in a player's own square.

When a player is out, everyone moves up one square and practices the English words, phrases, or questions as they shift. Four Square works best with older students.

Every lesson can get better, even without technology or a textbook. Think “outside the box”. Remember how you learned, and what some of your favorite games and activities were. How can you adapt them to fit with your lesson, or in any lesson?

Set up tables an equal distance apart, and six cups on each table. Cups should be in rows of one, two, and three, but not on top of each other. Then place an English letter, word, or expression that corresponds with the lesson inside each cup (along with a small prize to offer more incentive).

The objective is to throw the ball inside the cups of the other team. Students should line up and take turns throwing the Ping-Pong ball.

When the ball lands in a cup, the cup is removed from the game, and the player who threw the ball must do something with the letter, word or expression inside. The first team to remove all six cups from the other team wins.

Instead of placing something English-related inside each cup, players from each team could ask and/or answer a question before tossing the ball each time. English Pong is fun for all ages and levels. It's an adapted version of Beer Pong, which is a popular drinking game that originated in the United States.

This is a good activity to introduce a lesson’s vocabulary. Divide students into two teams. Give each student a number. There should be two of each number, one for a student on each team. Make sure teams have an equal amount of players.

Have teams sit in two lines with their backs to each other. There should be enough space between the two teams to run. Place the 'bacon' (one letter or word) in the middle of the two groups before shouting a number.

The two students with that number have to get up and race to the letter or word in the middle. After a student grabs it, he or she must try to run back to their team’s side without being tagged by the other player. If he or she gets to their side successfully, they get to keep the letter or word. If they're tagged in the process, the other team gets to “steal the bacon”.

Teams compete until all pieces of ‘bacon’ have been collected, and whichever team can form the first word or sentence with their strips of ‘bacon’ is the winner. If both teams are unable to form a word or expression, whichever team has the most strips wins. This activity is better suited for younger learners.