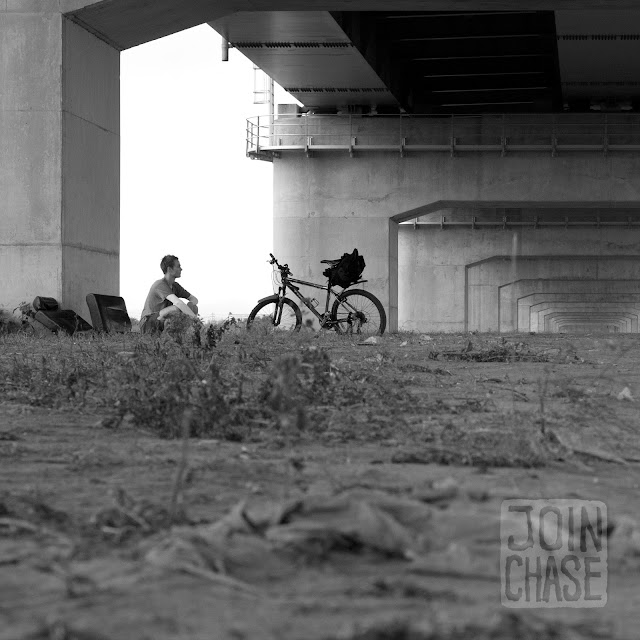 The following post was written for my new "Biking Ventures" series on Kimchibytes. Kimchibytes is a collective effort of contributors focusing on bringing the best content from South Korea to the world.

Two days. Mostly overcast skies. Rain. Lots of low clouds and fog blanketed the surrounding mountains with calmness. Smell of watermelon. Beckoned. Fresh cobwebs. Entangled. Fishermen hid under umbrellas during the battle between rain and sun. Garlic. And onions. Hung to dry. Peppers growing. Puddles to splash in while dodging snails. Riding along the Geumgang Bike Path in South Korea with just my bike and a backpack. A weekend well spent.

Greatest part of the trip was when my phone died, and I couldn’t find any place to charge it (without a power adapter). That’s when the real adventure began. No longer was I as concerned about time. I was forced to interact with locals. I had to ask for help. I couldn’t Instagram everything. And I got myself into random situations as a result.

I did very little research about the trail ahead of time. I didn’t even know what cities I’d be going through, or what areas of Korea I’d see. How long would it take? Where would it end? Would I be able to get back in time for work on Monday morning? Questions left unanswered until the very last drop. Drop of sweat. Drop of rain. Dropped off the bus.

Sometimes it’s best if you don’t know where you’re going before you go. If that sounds appealing to you, stop reading now. If you’d like more information about biking in Korea, particularly along the Geumgang Bike Path, below are ten things you might want to know.

1. You can do the trail in a weekend, even if you’re not an avid biker. It’s about 150 kilometers total, which means eager bikers could probably even do it in a day. However, as with any journey in life, it’s not always about the destination. Doing the path in two days will give you more of a chance to experience some of the old, historic cities, as well as beautiful scenery along the way. Places I would’ve never known about, seen, or chosen to go otherwise.

2. The path is rather flat the entire way, which is the main reason I believe about anyone could do it in a weekend. At one point you’ll go up a mini mountain, but while suffering through the incline you get to experience intimate glimpses of life on the countryside of things. Rural. Farms. Terraced. A part of Korea so different from where I live, and in stark contrast to Seoul.

3. The official start is at the Geumgang Estuary Bank north of Daejeon, and it ends at Daecheong Dam between Gunsan and Seocheon on the West Coast. You can get to the Geum River Bike Path from other bike trails as well. It seems like most rivers in Korea have some sort of bike lane or farm road that doubles as such. If you happen to live near Cheongju, or find it easier to start from there, you can follow the north branch of the Geumgang until it intersects with the official trail. You’ll pass by cities like Ochang, Oksan, Osong, and a lovely lotus park if take this route.

4. Best part about following rivers is you can’t get too lost. No matter what happens, just figure out where the river is located in relation to your whereabouts. I got lost once. In Gongju. But, only because the trail actually cuts through the city a bit. I didn’t see the sign pointing me in the direction to turn. I was too distracted by historical landmarks such as Gongsanseong Mountain Fortress.

5. If you’re biking on a budget, there are many designated places to camp along the bike path. However, I stayed in Buyeo overnight. Even though Buyeo is a little out of the way, it’s a good just-over-halfway point.

I stumbled upon Samjeong Buyeo Youth Hostel, as part of Hostelling International. I got my own room. Air-conditioning. Hot shower. Slumbered on the floor with six pillows, plenty of cushions, and comfortable blankets. All for 16,000 won. It was awesome. I slept well. So well I woke up way too late the next day.

There are bike lockers outside the hostel, sponsored by KTO (Korea Tourism Organization), although the man at the front desk just had me bring my bike inside for the night. You’re supposed to be a member of Hostelling International to stay, but I couldn’t explain in Korean that I wasn’t. With space for around 500 guests, why would anyone be turned away (if it’s not full)?

6. I prefer eating at convenience stores while biking around Korea, and there are plenty of them when you ride through cities. It’s fun to stop by Korean restaurants, but at convenience stores I don’t have to worry about being too sweaty or dirty. I can sit outside, unpack, repack, relax, fill my water bottles, and stock up on needed supplies for the stretch ahead.

7. Wearing swimming trunks or a bathing suit is a good idea, especially if you decide to bike in South Korea during monsoon season. In addition, swimming attire usually dries quickly, cleans easily, and you can either dump water all over yourself to cool off, or find a place to take a dip.


8. My favorite spot along the Guemgang Bike Path was between Buyeo and Nonsan. There were so many cool abandoned buildings, providing plenty of chances for impromptu photo shoots. Things were overgrown. Rugged. I had to swerve around snails sliding across the road, unintentionally hitting a few. Dragonflies seemed to chase me. And I rested under highway bridges, where urban met rural with spectacular views.

9. Whatever you do, don’t take the trail to Seocheon. You have an option. About 20 kilometers away from Daecheong Dam you can either cross the river by bridge to get to Seocheon, or continue going toward Gunsan. Why shouldn’t you go to Seocheon? The paved path abruptly ends, and you’ll have to bike the last 15 kilometers or so through mud.

Doesn’t sound like a big deal, but when it’s rainy season in Korea, and you’ve already gone about 140 kilometers, the last thing you're going to want to do is trudge through mud. My tires sank deeper the faster I pedaled. It was terrible. I don’t know if the Gunsan side is finished, but at least there’s a chance it is.

Another reason to bike to Gunsan instead of Seocheon is because Gunsan has a train station, as well as express, and intercity bus terminals. You can’t get on trains in Korea with a bike unless you have a bag for it. I learned this the hard way. However, you can nicely toss your bike under a bus with no restrictions.

10. How helpful people are never ceases to amaze me. Just ask! I followed a couple of bikers to the train station in Gunsan, since I had no clue where to go. Even though the decision to follow them ended up being the wrong one, I still think it was meant to be. Once at the station, we interacted in basic sentences. They helped me figure out I wouldn’t be able to take the train with my bike.

At this point it started to downpour, so I went inside to see a map. As I was looking at a large map on the wall, I overheard people speaking English. It was a group of exchange students from Taiwan. They asked if I was from around the area, and if I’d be able to offer any suggestions of things for them to do.

As is usually the case, I couldn’t assist them, but they ended up helping me. One of the girls used her phone to show me where the bus terminals were from our location. I grabbed a paper map, put on a large black garbage bag as a raincoat, said goodbye to all of my new friends, biked another thirty minutes to the terminals, and thankfully caught the last bus to Daejeon.

I made it home in time to get a good night of sleep before work on Monday morning. Even though I didn't really make any plans for this trip, everything worked out as it always does. I simply hopped on my bike, hoped for the best, and ended up learning so much about life, South Korea, and myself along the way. I also learned you'll get some pretty funny glances if you wear a black garbage bag as a raincoat. Giving locals the very best impression of foreigners in Korea is what I do best. I guess.

For more information about all major bike paths in Korea, check out the official Four Rivers Guide.