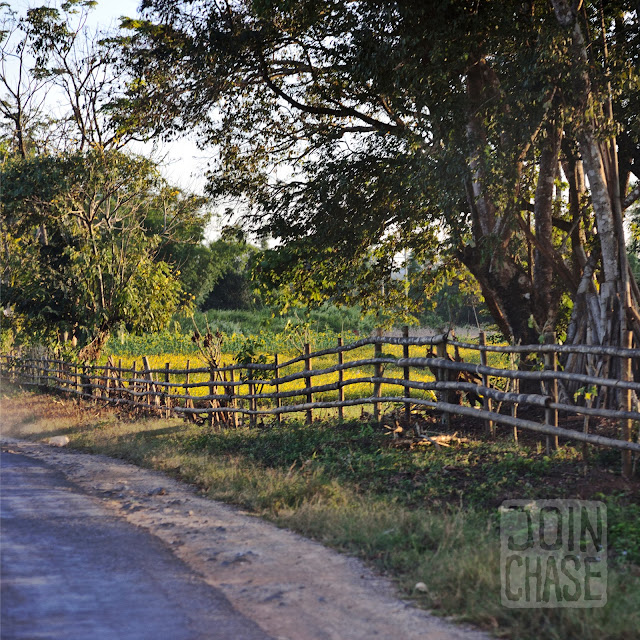 Clouds filled the bright, blue sky with puffs of white. Mountains engulfed the horizon in every direction. Endless fields of green and gold created the perfect backdrop for dusk. I had no idea where we were going, or even where we were.

A single, sometimes red-dirt road cut through the countryside, offering an up close and personal encounter with rural Myanmar. It was bumpy. I was sleepy. I hit my head on the window once, and bit my tongue another time. Thanks to the bumps.

Sunflower fields basked in what sun was left. Tufts of bamboo reached for the hazy sky. Pagodas dotted the landscape every which way. Paths that led off-road invited my mind to wander and wonder about where they could take me.

A child dressed in cultural garb greeted me with, mingalarbar, as he put his two little hands together and slightly bowed. People wearing brightly colored attire rode past in trucks. It’s winter here, so locals are dressed in layers. But, for me, it still feels like summer.

An old woman beckoned me with her black, rotted teeth, to buy something at a market near a place with a thousand pagodas. Sweet and salty sunflower seeds alongside piles of roasted peanuts, mounds of green tea leaves, loads of turmeric, and heaps of dried beans were for sale.

A little boy rolled an old tire along the road. He’d hit it with a stick, and then chase after it. Groups of men played chinlone, as boys threw rocks into trees, or rode off with bamboo fishing poles on the backs of their bikes.

Cows blocked our way at one point, providing an even closer look into the lives of people living in the southern portion of Shan State. There was so much to process. I wanted to cry it was so overwhelmingly beautiful. An area seemingly more true to Myanmar, not as influenced by the outside world. This is the Myanmar I want to be in. Not Yangon.

I caught a monk hitching a ride on the back of a motorbike. I noticed power lines made out of croocked tree trunks. I watched children walk home from school in their green and white government uniforms. I observed people washing dirty laundry in waterholes, competing for space with others bathing. I saw a man perched by his fire, smoking a cheroot, waiting for his dinner to cook.

This must be what life was like in the United States or most “developed countries” before ‘developing’. People seem much more in touch with the land, and in tune with each other for survival. I don’t want that to change in Myanmar. But, it will.

As the sun was about to set, we made our way back to Taunggyi. Farmers continued watering fields of garlic, and paddies of rice, using shovel-like tools to scoop up and spread water. Homes made from thatched materials gradually transformed to those constructed out of cement, wood, or bricks the closer we got to the city. And just like that we were back, leaving everything behind as if it were a dream.