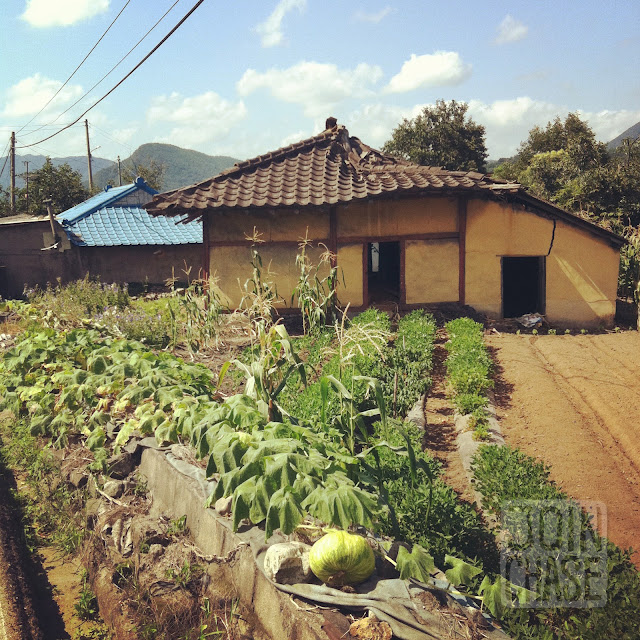 It took us awhile to get to the top of the last mountain yesterday. We made it just in time to watch the sunset, however. Absolutely spectacular! Then Khoi and I rested a bit before enjoying an exhilarating ride down.

We stopped at a restaurant for dinner near the bottom, and happened to run into the same man and his son again. You become like family with others on the trail, sharing a similar experience. We’ve met plenty of people along the way, and it’s fun to keep biking into them.

After dinner we followed the man and his son to where they planned to stay for the night. It was a motel district in Mungyeong. We didn’t quite make it to Mungyeong City, but that was okay. We were happy to be in good company, and after a long, hard day, we decided to book a room.

After settling in for the evening, the man took us out for salmon sashimi (thinly sliced raw fish) and beer. Khoi and I were exhausted, but enjoyed our time nonetheless. He treated us, as is customary in Korea for the oldest person to do so. We didn’t resist his kind gesture, but called it a night early.

Today was another huge day of biking. We decided to aim for Gumi, which was quite far from where we started. Because of our wrong turn yesterday, and having to go up so many mountains, we were a bit behind schedule. Gumi would be difficult to reach.

For the first half of the day we made really good progress. Then things (mostly Khoi) turned a bit dramatic when we almost ran out of water.

It was hot. And we were literally in the middle of nowhere. With no other options in sight, we were forced to stop at a random village in search of water.

Fortunately, a restaurant was open, and the owners offered us water from a hose in their front yard. Although Korea has very clean tap water, this was definitely a questionable, potentially unsafe source. We filled our bottles anyway, and grabbed lunch in the process. Lunch in these parts isn’t as expensive as one would think. Right, Khoi?

Shortly after lunch we got separated from each other for nearly an hour. Drama!

Soreness from the past three days made everything more difficult than necessary. At one point we even thought the trail took a detour, and we’d have to hop on a bus or in taxi to reach our destination. Thankfully, that wasn't the case.

We finally made it to Gumi as it began to get dark. It took the last of our strength to keep pedaling, but it was worth it. Our reward was eating enough noodles to feed a Korean family, and spending time with our Korean friend, Howl.

We've gone around 300 kilometers since Saturday. Only about 250 more to go! It’s time to get some sleep in our VIP motel suite. So much for camping, or sticking to our budget.